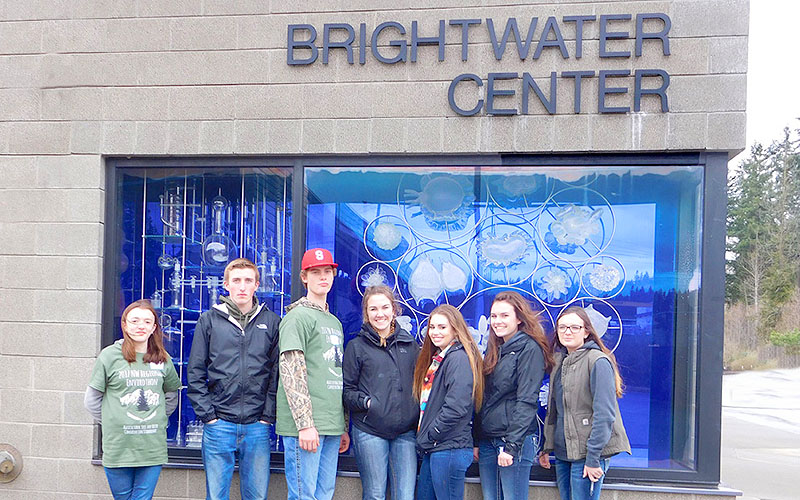 King Conservation District hosted the Northwest Regional Envirothon on March 29, 2017 at King County’s Brightwater Center in Woodinville. Five teams from King County and two teams from Snohomish County demonstrated their knowledge of Forestry, Soils/Land Use, Wildlife, and Aquatic Ecology, plus the 2017 topic of Agricultural Soil and Water Conservation Stewardship. They were also asked to present an oral argument in front of audience of three natural resource professionals on a scenario related to the the 2017 special topic.

The Mercer Slough Caddisflies, one of three teams from Bellevue’s Mercer Slough Environmental Education Center, won first place for both King County and the Northwest Washington region. Stanwood High School Team #1 was this year’s Snohomish County winner. Both winning teams from each county will compete in the two-day Washington State Envirothon at Camp Waskowitz in North Bend, Wa on May 18 and 19, 2017. One team from the State event will go on to the North American Envirothon this July at Mount St. Mary’s University in Emmitsburg, Maryland.

Thank you to all our test writers, judges, volunteers and King County’s Brightwater Center for your help in making this a great event!

Photos from the 2017 NW Regional Envirothon

Find out more about Envirothon here.

Do you live alongside a stream or lake? Join us to

Where would you plant this beautiful Mock Orange p

Do you know this Western Washington native plant?

Do you own a lakefront property? Lakes play an imp

King Conservation District and the City of Seattle

Back in April, the hard work of two KCD-sponsored

Did you know Snowberry is a wonderful species for

Did you know more than 25% of the Puget sound shor

Did you know that coniferous trees can intercept 2

Do you live along the King County marine shoreline

Presenter John Bethel will be speaking about the g