For almost four decades, Jeanne Hannah has been working tirelessly to create and maintain a streamside wildlife sanctuary at her home on Cottage Lake Creek in Woodinville. Jeanne’s garden, which has won prizes and praise on garden tours in past years, is an example of how Pacific Northwest native plants can be seamlessly integrated into a landscaped garden.

Besides being an avid gardener, Jeanne is also a dedicated steward of the land: before the house was even built on her land, she was already planning the 105-feet long and 20-feet wide buffer along the stream, which was denuded of any plants at the time. Jeanne’s effort went beyond restoring the buffer on her property: she was also one of the members of the Bear Creek Basin Plan Citizen Advisory Committee and a volunteer for King County’s Salmon Watcher Program (which discontinued in 2015).

Jeanne developed her planting plans by considering the colors of flowers, foliage, and bark, as well as flowering time and fragrance. The plant palette is a mixture of PNW native species, such as red osier dogwood, salmonberry, and mock orange, intermingled with ornamental species, like rhododendrons cultivars, Kousa dogwood, and dawn redwood. Jeanne has participated in KCD’s Annual Native Plant Sale for years and has installed thousands of native plants in the buffer over time. This buffer has grown wider over the years and is now a lush and diverse habitat for wildlife, and is providing shade for the stream to keep the water cool for aquatic organisms. With the improved condition of the stream, it was not surprising when Jeanne saw the return of sockeye, Chinook, and trout, to the stream. Seeing birds and wildlife using the restored habitat was one of the highlights for Jeanne. She has observed a wide variety of animals, such as wood ducks, humming birds, great blue heron, muskrat, and the list goes on! 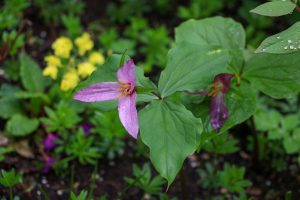 Jeanne is also an advocate for not watering the lawn during the dry season – the yellowing of her lawn at the end of the summer is just another indication of the change of season, and a sign telling her that it is time for the annual pig roast that she hosts at her house! She uses every opportunity she has to educate friends and neighbors about the benefits of restoring streamside habitats, planting native species, and eliminating the use of lawn chemicals and sprays, as well as the importance of doing proper research prior to planting so as not to inadvertently installing invasive species. Taking actions to protect the natural habitat is even more pressing now with climate change, and as she observed the fish count in the stream dwindling since the surge of numbers in the early days.

We applaud Jeanne and individuals like her across King County who not only take the initiative to enhance the natural habitat on their own property, but also take the extra step to spread the word about the importance of conservation practices that would benefit us all.