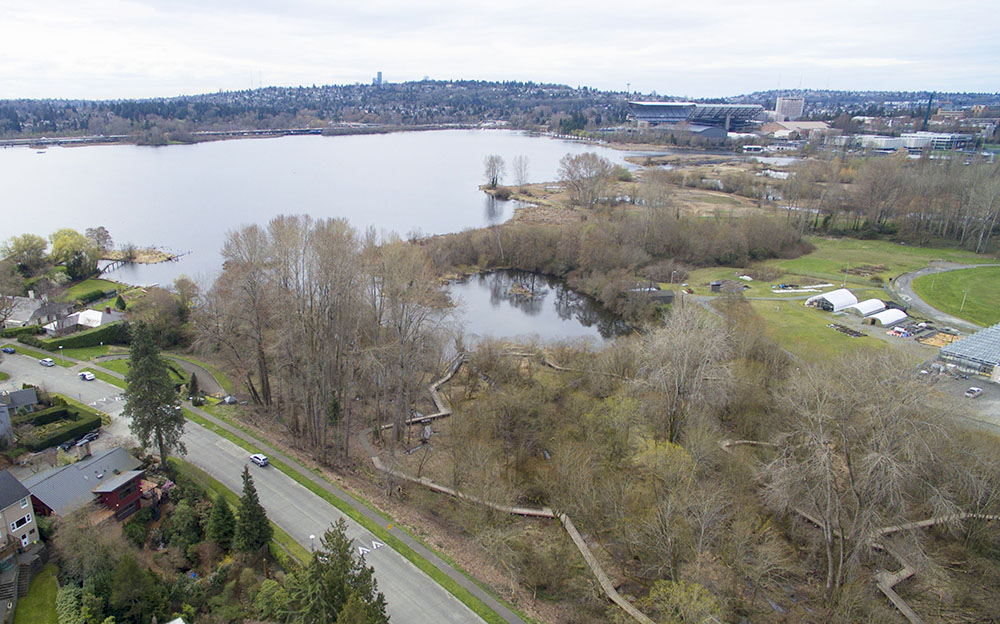 In 2015, Seattle Parks Foundation received a KCD-Seattle Community Partnership grant award for $31,940 to restore six acres of wetlands along Lake Washington in 2016 by to plant native plants and to hire a wetland scientist-in-training to coordinate work, volunteers, and construction of a viewing platform for environmental education and community access.

On August 1, 2019, KCD Staff and Board Member Kirstin Haugen were given a tour of the site by committed volunteer, Carol Arnold. Carol described the history of site, which was once a mill. Lake Washington was lowered in 1916 and after several fires the mill shut down in the 1920’s. The current Yesler Swamp site was previously under water until the lake was lowered and land was exposed. The area is now known as the swamp.

Carol explained something important that she learned during this project, that it is not a wetland because there are trees. A wooded wetland is known as a swamp. When they first began work on the swamp, it was full of trash and rats and covered by blackberry and ivy.

Students in the University of Washington’s Environmental Studies Program have committed to 5 years of monitoring and maintenance over the long term.

Local Cub Scouts also planted native plants around the overlook and removed ivy growing up a nearby tree. The site has a wide variety of invasive weeds but
also serves as an educational site for multiple groups who hold work parties.

Friends of Yesler Swamp raised funds with donations and grants from private foundations, KCD and the Seattle Department of Neighborhoods. KCD grant funds paid for interns who lead work parties, ordered plants, conducted monitoring and education and outreach to the community. Funds also paid for construction and materials, along with a survey.

The specially designed ADA accessible viewing platform looks out on wetland plantings of swamp lantern, cedar and other native plants. Invasive plants have been removed but will need consistent removal over the long term. Special signage demonstrates the value of swamps along the shores of Lake Washington.

WCC Crews installed the boardwalk using diamond piers and pin piles which is a low impact method of supporting the boardwalk that doesn’t require drilling into the swamp. In the area owned by Washington State Department of Natural Resources, the boardwalk had to incorporate fish-friendly deck material with grates to let sunlight in which deters fish predators from hiding and eating juvenile salmonids. Most of the boardwalk is made of untreated cedar, some treated wood that is away from water was allowed, but in-water structures could not be treated wood to prevent copper from leaching into the waterway.

Community use of the trails and the boardwalk is high. People walk their dogs and comment about what a beautiful-hidden gem the swamp is. A large beaver lodge is present on site and there is an abundance of wildlife to see, including ducks, snakes, frogs, owls and eagles. Educational signage about the environmental benefits of the swamp appear throughout the boardwalk.

The upland section of the site, where there are steep slopes, is managed by the Green Seattle Partnership program.

Jessica has managed the Member Jurisdiction and WRIA Grant Programs at KCD since March 2007. Jessica has a Bachelors degree in Environmental Studies and Spanish and graduate level education in the fields of Public Administration, Urban Planning, and Facilitation and Negotiation. She is an experienced program manager responsible for tracking millions of dollars in grant funding with a successful track record of liaising with local governments, nonprofits, and watershed groups on natural resource conservation issues.