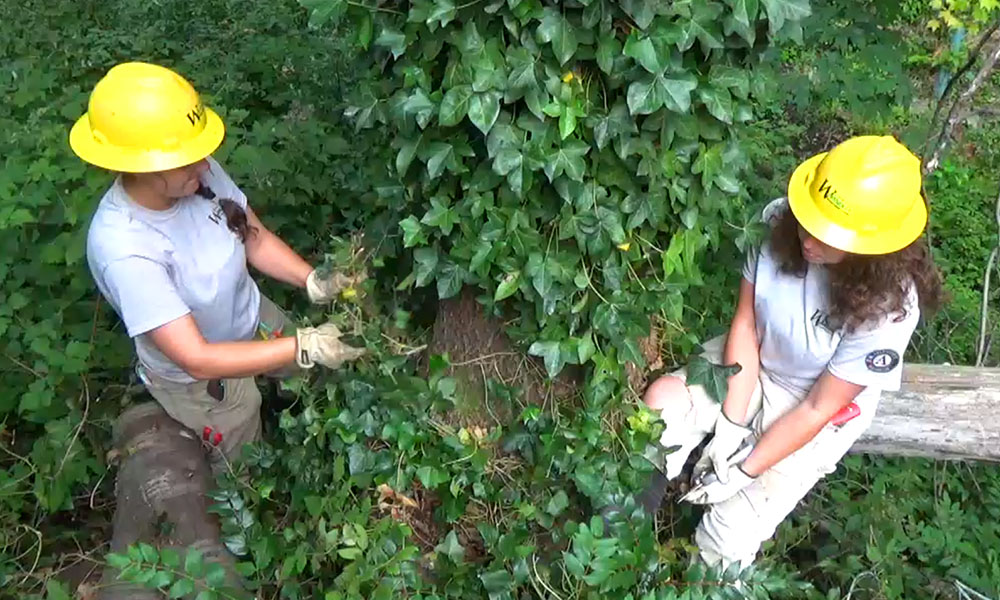 English ivy (Hedera helix) is a woody, evergreen, perennial vine commonly seen in urban and suburban forests in King County. It was first introduced in the United States by European settlers as ornamental plants. Since then, it has spread throughout various regions across the country, including King County. There are four cultivars of English ivy (Hedera helix) that are listed as a non-regulated Class C noxious weed in King County. They are Baltica, Pittsburgh, Star, and Hibernica. Although landowners are not legally required to control these plants, KCD strongly recommends controlling, or at least containing them, as well as discourages planting them.

English ivy vines have tendencies to spread horizontally and climb vertically. They don’t directly poison trees, but do negatively affect tree health and increase the likelihood of the tree becoming hazardous to surrounding areas. The thick vines decrease light exposure and make trees vulnerable to tree bark disease and rot. Physically speaking, the sheer mass and surface area that English ivy adds to a tree can make it more susceptible to falling over during high winds.

To contain English ivy and promote tree health, KCD recommends creating a survival ring. Although it may be tempting to remove ivy by pulling it off of a tree, KCD advises against that practice due to the likelihood of potentially damaging the tree or creating hazardous falling debris.

First, to remove the ivy from the tree and its surrounding area:

Now that you have the survival ring created, see how to deal with the ivy mass by creating a compost raft.

Did you know you can receive five free soil tests

Learn how to turn your stream or lakeside property

Want to harvest delicious native berries from your

It's time to vote in the 2023 KCD Board of Supervi

Thanks to our volunteers today who took advantage

Join us Tuesday, February 7 at 6pm for a free one-

Do you live alongside a stream or lake? We will be