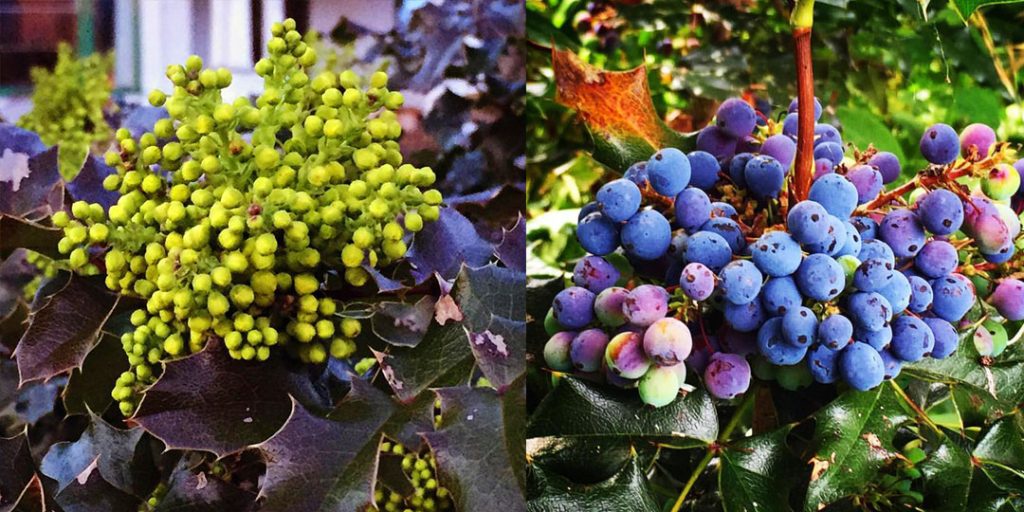 The following question was sent to us recently:

“Help 🤣 My Oregon grape is very top heavy. How should I prune it? It’s all tipping over. It’s from 2019 native plant sale.”

Wow that’s a good amount of growth if it’s already top heavy. I’m no pruning wizard so your guess is as good as mine. These guys are pretty light thirsty and I have seen them lean pretty heavily to reach for light coming from one side. Is a lean like this contributing to it’s top heavy growth? If so it might be a constant struggle as it keep reaching and leaning. Otherwise I suggest a pruning that attempts to lighten it’s load. So that means selective even pruning all around that takes about 25% of the vegetation off. Good luck.

In general these guys seem pretty resilient to heavy inappropriate pruning hack jobs too. I’ve seen good examples of this around various banks and business park landscaping where they’ve turned the poor plant into a circle or square and such. Once established they are very hardy. It’s the first year transplant shock that usually kills the tall and low Oregon Grape.

And to assist with further information, we found the following tips on pruning:

“Pruning should be done in spring once the shrub is done blooming.”

“If you want to try to keep a larger variety down to a smaller size, the best time to prune would be in late winter or very early spring before the new growth begins for the season. At that point you have two choices. If the plant is an old one and very overgrown, you can rejuvenate it either all at once by cutting it to the ground or in stages over about three years by trimming away a third of the oldest wood each year by cutting it at the base. The new growth will come from the ground or the base of the plant and the end result will be a size reduction for the time being. After that, periodically remove a few of the oldest branches each spring to keep the plant in bounds. Finally, as a side effect, the top pruning typically stimulates the growth of new branches or spreading suckers from the base thus making the plant wider; you may be able to remove some of these spreading bits with a sharp spade.”
Source: Pruning Of Oregon Grape Holly – Knowledgebase Question, National Gardening Association, April 8, 2002

“If you don’t plan for its growth or it somehow gets out of hand, roots may be occasionally pruned and stems may be cut (as seldom as possible) nearly to the base for renewal.”

Q: Should I be pruning my Oregon grape right now, along with my other bushes and trees?

A: Probably not. The various species of Oregon grape seldom need pruning. If you have one of the bushy kinds and it seems to be getting too crowded, prune it as you would any other bush. In other words, thin by cutting any unwanted stems as close to the ground as possible, but do not remove more than a quarter of the stems in any one year.
If your Oregon grape seems to be a suckering type, just cut off any stems where you do not want them to be growing. If your Oregon grape is a ground cover, prune it only if it grows too tall. Cutting stems to the ground will encourage compact and dense growth. Oregon grape is definitely a low maintenance plant.

Get this and other native trees, shrubs and groundcovers from KCD’s Native Plant Sale.

Thanks to everyone who braved the smoke and came o