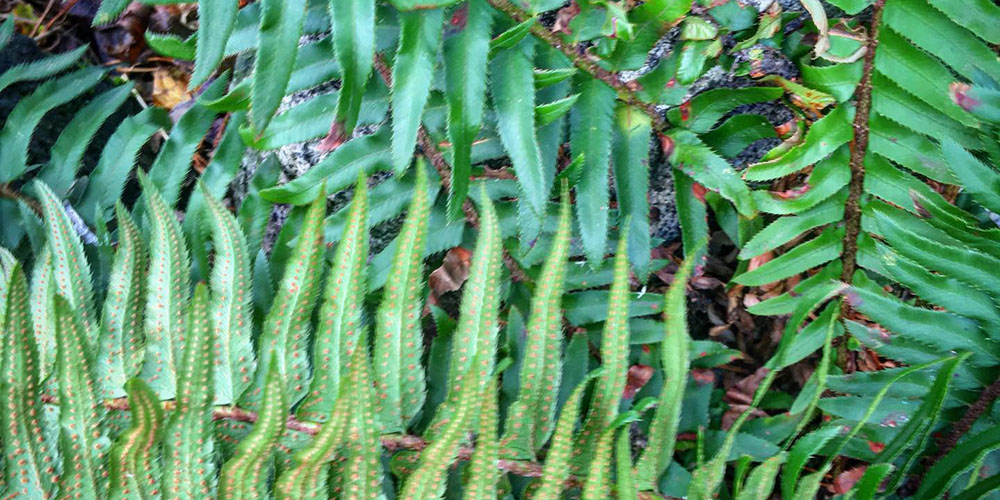 The ancient Sword Fern is one of the most abundant of the Pacific Coast ferns. Its evergreen, toothed fronds are as much a signature of the Pacific Northwest as the damp, mossy forests where Polystichum munitum finds its home. This fascinating groundcover species produces spiraled “fiddleheads” in the spring, which unfurl into new fronds throughout the season.

Sword Fern prefer to be planted in partial to full shade and moist soil, although it is a hardy plant and can survive occasional dry periods once established. It has held traditional significance among native tribes of the Pacific Coast, as its leaves were once used to line pit ovens and berry-drying racks, and the rhizomes were dug up as an occasional food source. Sword Fern is known as “Pala-Pala Plant” in some Vancouver Island and Puget Sound languages because it was used in a children’s game. On a single breath, kids would pull as many leaflets off the fronds as they could, saying “pala” with each one.

Invite the ancient wisdom of the Sword Fern into your landscape by pre-ordering this groundcover from KCD’s Native Bareroot Plant Sale today!

Do you live alongside a stream or lake? Join us to

Where would you plant this beautiful Mock Orange p

Do you know this Western Washington native plant?

Do you own a lakefront property? Lakes play an imp

King Conservation District and the City of Seattle

Back in April, the hard work of two KCD-sponsored

Did you know Snowberry is a wonderful species for

Did you know more than 25% of the Puget sound shor

Did you know that coniferous trees can intercept 2

Do you live along the King County marine shoreline

Presenter John Bethel will be speaking about the g