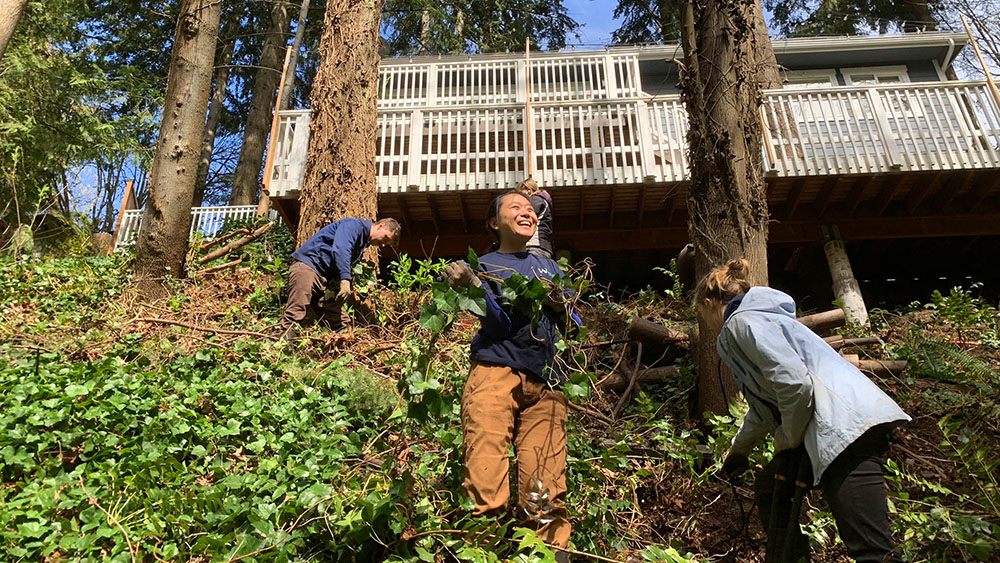 In April, King Conservation District worked with a north Seattle homeowner to restore 3,300 square feet of streamside habitat along the north fork of Thornton Creek. The ravine was covered from top to bottom in ivy and other invasive weeds, including laurel, holly, and Himalayan blackberry. In just a weeks’ time, the hard work of two KCD-sponsored Washington Conservation Corps crews helped transform an ivy-carpeted streamside property into a native backyard oasis.

During the first stage of hand-pulling the ivy, a duck’s nest was spotted when a female mallard landed in an area near the top of the slope. It was a wonderful discovery for the crews and homeowners. In an effort to leave the nest undisturbed, crew members left a protective, no-entry zone around the nest and made plans to stop work in that area until after nesting season. For those interested in learning more about other considerations for accommodating wildlife during restoration projects, resources like Green Seattle Partnership’s Forest Steward Field Guide can help!

Continued removal of the ivy revealed a smattering of native plants, like osoberry, sword fern, and low Oregon grape. Now that the ivy is gone, these native species have less competition and a much better chance of survival. Those plants, in addition to the 144 native trees and shrubs that were installed will eventually form a dense vegetated buffer that will provide improved habitat and food sources for small mammals, birds, bees, and hopefully, with continued efforts to improve the health of Thornton creek salmon.

Learn more about KCD’s Urban Riparian Habitat Stewardship Program and how you can help improve your streamside property by contacting Ashley Allan.

Did you know you can receive five free soil tests

Learn how to turn your stream or lakeside property

Want to harvest delicious native berries from your

It's time to vote in the 2023 KCD Board of Supervi

Thanks to our volunteers today who took advantage

Join us Tuesday, February 7 at 6pm for a free one-

Do you live alongside a stream or lake? We will be